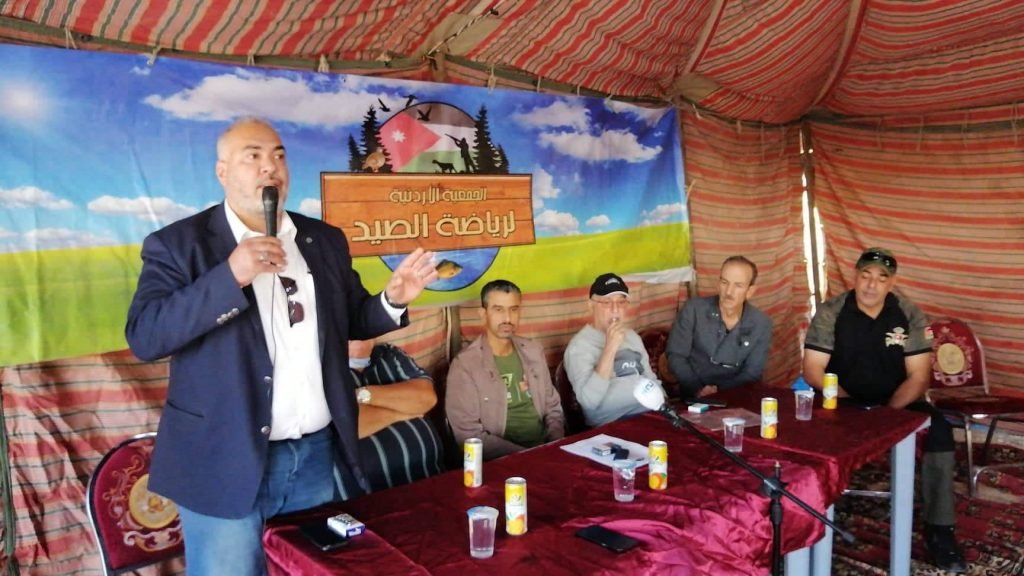 The head of the Jordanian Sports Hunting Association, Ahmed Nazzal, confirmed during the meeting that this association includes 1250 hunters out of 5,000 licensed hunters in Jordan, and this qualifies the association to speak on behalf of fishermen in Jordan. Especially since its members have nothing to do with the world of fishing and its seasons, so their decisions are not based on the reality that we know well with regard to fishing, its seasons and regions.

A large number of fishermen whom Nowruz Al-Akhbariya met during the meeting indicated that there is an infringement on the rights of the fishermen, and we attended this meeting to confirm our demands before the Ministry of Agriculture, which is the opening of fishing east of the railway, which constitutes three quarters of the area of ​​Jordan, because the west of the railway has become overcrowded with people and fishing has become annoying fishermen and housing, especially In the Jordan Valley, we must reconsider our legitimate demands and dialogue with the association and give it its real role in supervising the hunting seasons in the Kingdom. The demands of the fishermen also focused on not seizing the hunter’s weapon from the first time and giving a first and second warning, then confiscating the weapon used in hunting, as well as why it is forbidden to enter the Burqa Reserve, and we ask the Ministry of Agriculture about this issue. The members of the Jordanian Sports Hunting Association demanded that they be granted the right to legal fishing east of the railroad, like the guests of Jordan who practice the hobby of fishing east of the rail, and why are they not called the prohibition law that applies to us as Jordanian fishermen. The members of the Jordanian Sports Hunting Association also demanded to allow air rifles to be licensed for hunting and not for the use of air sports, and to re-form the Wildlife Committee to organize the sport of hunting. The fishermen also demanded that they obtain a license in this field, establish seasons for fishing, and allow fishing in the Gulf of Aqaba, which is the only marine outlet for practicing this hobby. Ahmed Al-Gweiri, who moderated the meeting, reviewed the demands of the fishermen in the meeting and directed the Minister of Agriculture

Subject / licensed fishermen gather to raise their grievance The Urdu Sports Hunting Association presents you with the highest meanings of thanks and gratitude for the great efforts you are making in order to achieve ecological balance and biodiversity, as the Association is the official representative of the fisherman under the authorization given to us by them and the facility, and where the number of association members is 1300 Affiliate, which makes us the largest association in Jordan. As we present to your Excellency the misconduct of the licensed fishermen due to the injustice that has occurred to them in making decisions, the mood of dealing, and the lack of ambiguity in taking decisions related to fishing, which we will explain in the attached meeting minutes. We hope that you will pay attention to our issue as we do not believe in the principle of sit-ins and gatherings, and we believe in the principle of institutional work to achieve our rights. Attached to you are the minutes of the meeting, and please accept the highest respect and appreciation. An expanded meeting was held for Jordanian licensed fishermen who hold a legal fishing license from the Royal Society for the Conservation of Nature on Friday 10/22/2021 to submit their complaints to His Excellency the Honorable Minister of Agriculture. Where the Jordanian Sports Hunting Association was authorized to represent them and speak on their behalf to put forward their demands on the following matters: Demanding the restructuring of the Wildlife Committee, which is concerned with opening hunting seasons, as through the presence of a member of this committee, we found that most members of the committee were not aware of the mating seasons and the life cycle of the bird, which makes their decisions all It is not correct in addition to the control of the Royal Society for the Conservation of Nature through its people to take the decision they want, as we ask your Excellency to restructure this committee and choose people from legal and committed hunters who know the role of the life of the bird. Demanding the opening of some areas east of the railway, as the areas west of the railway have all become within the municipal boundaries and are full of people, which makes it impossible for us to practice our hobbies, as the areas east of the railway are vast desert areas and the birds in it are transient migratory birds, where fishermen of Gulf nationalities are implicitly allowed to hunt In these areas, and this is with all of our observations, despite the Royal Society for the Conservation of Nature being informed of this several times without any action on their part. Are the areas east of the railway restricted to non-Jordanian fishermen only? Providing us with the reasons for the ban and the official formula to prevent it. Demanding an official and clear explanation from the Royal Society for the Conservation of Nature of what is happening in Burqa’ reserve and the news that circulated that it was sold to an Emirati investor, preventing any Jordanian citizens from entering it and allowing fishermen of Gulf nationalities to fish in it and not allowing Jordanians to enter it, and this is what happened with us. Demanding the amendment of the instructions issued by the Ministry of Agriculture regarding the weapon used for hunting, the cartridge firearm, and the addition of the air rifle to the instructions, as the air rifle is a safe weapon used in the hunting process, and its use was permitted by His Excellency the Minister of Interior, according to the attached book. Al-Mataliah to provide the Jordan Sports Hunting Association, being the legal representative of the Jordanian fishermen, with a copy of the authorization granted to the Royal Society for Nature Conservancy by the Ministry of Agriculture, which includes their authorization to monitor hunting and organize the hunting process. Demanding a solution for the fishermen of the East Seka area, such as the Azraq region, for example, by allowing them to practice their hobby in their areas within the limits of the law, since it is impossible for them to reach the areas west of the Seka. Demanding to provide us with the statistics of the official shinnar preparation through which the shinnar hunting season has been closed, and to provide us with periodic statistics to open the seasons and the basis on which the hunting seasons are closed or opened. The claim is to amend the Agriculture Law of 2015 and the article that stipulates the confiscation of the hunting weapon in the event of a violation of the law, whereby a weapon whose value is estimated at more than a thousand dinars will be confiscated in the event of hunting a violating bird, knowing that we do not encourage violating the law and returning to the pre-2015 procedure because In the event of committing a violation three times, the weapon will be confiscated and not from the first time, i.e. materially violating it according to the law and giving him a first and second warning, and then confiscating the weapon in the third violation. This meeting was edited from nine points, including this point, edited in Amman on Friday 22/10/2021.